Sculptures of Buddhas in a Buddhist cave at Ellora.

As a first-time visitor in Ellora, I was immediately impressed by the fact that all temples, pillars, balconies and sculptures have all been carved out of ONE piece of rock.

The masterpiece at Ellora is the Kailasa Temple. Dedicated to Shiva, it is the world’s largest monolithic sculpture, hewn from rock by over 7000 laborers over a 150-year period. Over 200.000 tons of rock has been removed to create the temple which covers an area twice the area of the Parthenon in Athens and is also 1½ times as high.

A visit to the Ellora Caves is a breathtaking experience. This is truly a World Heritage Site in the same class as the Pyramids, Petra or Taj Mahal and an absolute must place to stop at when you plan your India travel route. 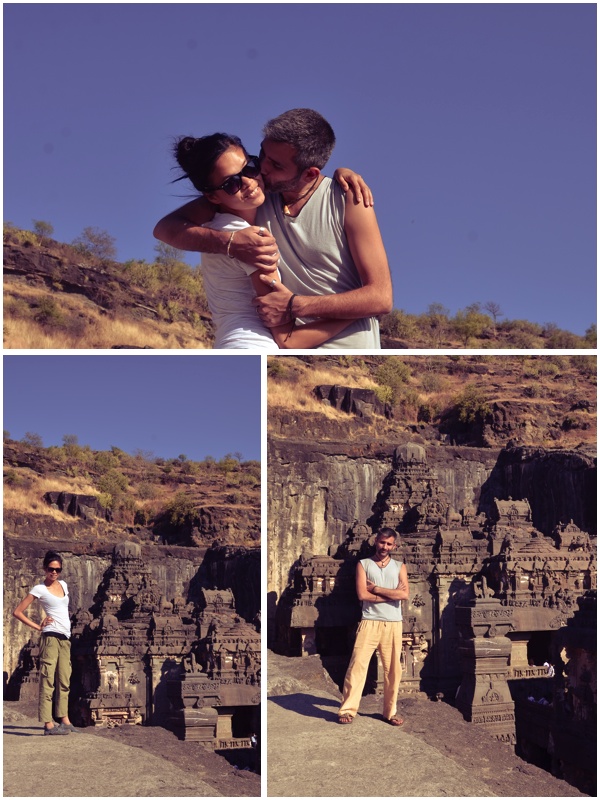 Behind us is the largest monolith rock cut excavation in the world – the spectacular Kailasa Cave.

Caves 1 – 12 comprise the Buddhist caves and monasteries and date back to the Chalukya dynasty (between the 7th and 8th centuries AD).

Caves 13 – 29 comprise the Hindu caves, carved between the the 7th and 9th centuries AD, and represent the peak of Ellora’s artistic development.

Caves 30 – 34 comprise Jain Caves and were carved in the late 9th century and represent the final stages of evolution of the Ellora Caves complex. 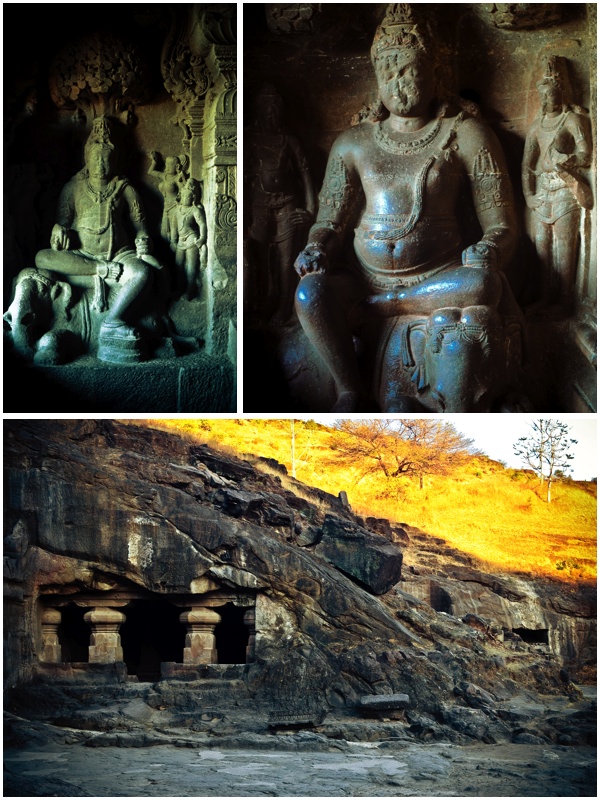 Cave 33 (Jagannath Sabha)
Similar in plan to the Indra Sabha (Cave 32), the Jagannath Sabha along with Cave 34, has some very well preserved sculptures. 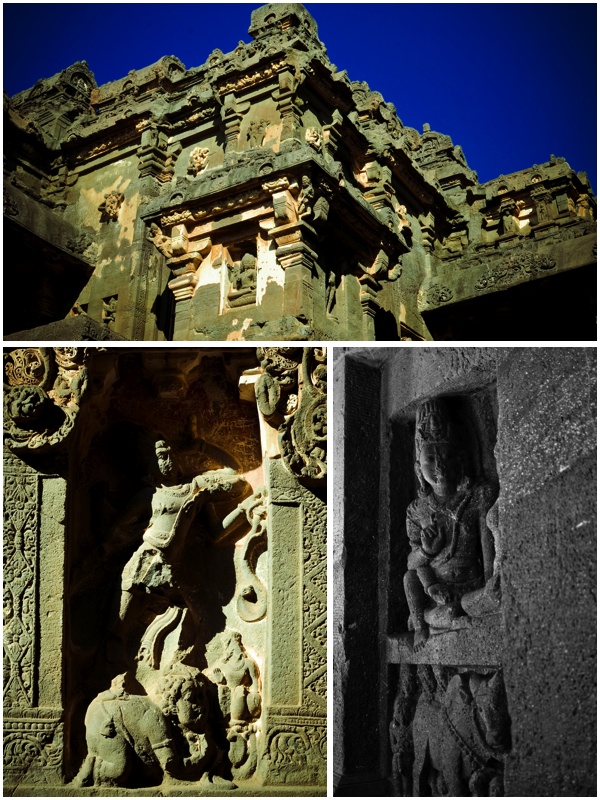 Ellora features three different religions that thrived at the same site. Buddhism, Hinduism, & Jainism co-existed during the development of the Ellora Caves suggesting the religious harmony that existed in India at that time. 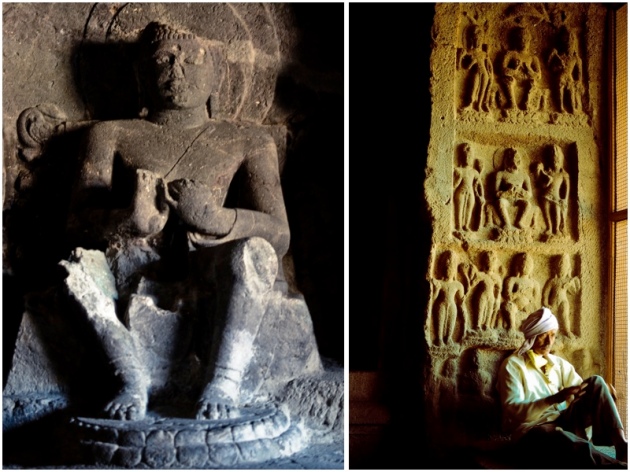 This is Cave 2. The cave has a verandah, and houses images of Panchika, the God of Wealth and Hariti, the Goddess of Prosperity. Each of the walls in the hall has sculptures of Buddha flanked by celestial figures and Bodhisattvas. A similar but larger figure of the Buddha can be seen in the sanctuary.

Caves 30 – 34 comprise Jain Caves and were carved in the late 9th century and represent the final stages of evolution of the Ellora Caves complex.

Cave 10: This cave marks the peak of Chaitya dynasty architecture in India. The Vishvakarma, or “Carpenter’s Cave”, gets its named from the ribs carved on to the roof which give the effect of being wooden support beams. There is a large figure of the Buddha, about 15 foot tall, showing him in a teaching position. The hall has porticos on three sides which lets plenty of light into the cave and a flight of steps in the verandah leads to the upper gallery.

Cave 21 (Ramesvara)
The Ramesvara Cave has beautiful figurines of the river goddesses Ganga and Yamuna at its entrance.
Cave 22 (Nilkantha)
The Nilkantha Cave has several sculptures.

Inside the Kailash Temple (Rock-cut temple)

Cave 5 (Mahrvada)
This Cave, called “Maharvada” and was used as a monastery (“vihara”) and consists of a spacious hall measuring 117 feet by 59 feet and divided into three columned aisles. The columns are decorated and benches have been carved out of the floor. The benches were sused by disciples while being taught the philosophies of Budhha. The monastery has a shrine for Buddha at the rear end and twenty cells for the monks.

Cave 6
The cave has columned rectangular hall. The walls and columns of the hall are both well decorated with with figures of the Boddhisattva and the goddesses Tara and Mahamayuri. 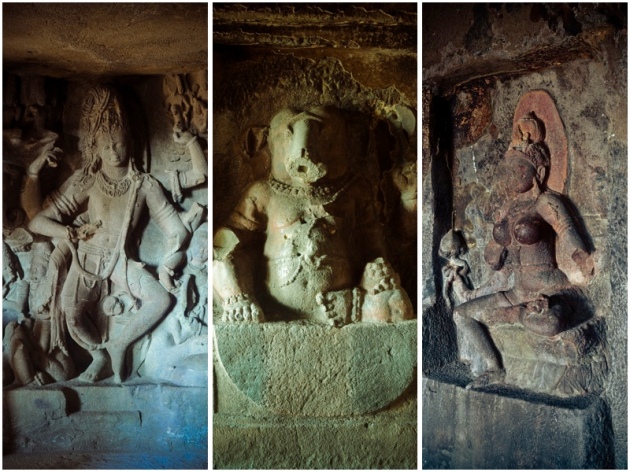 Cave 9
The highlight of this cave as wall carving depicting the Goddess Tara in the act of rescuing devotees from the snake, an elephant, a fire and a shipwreck. The cave also has an open terrace with a balcony and a shrine. 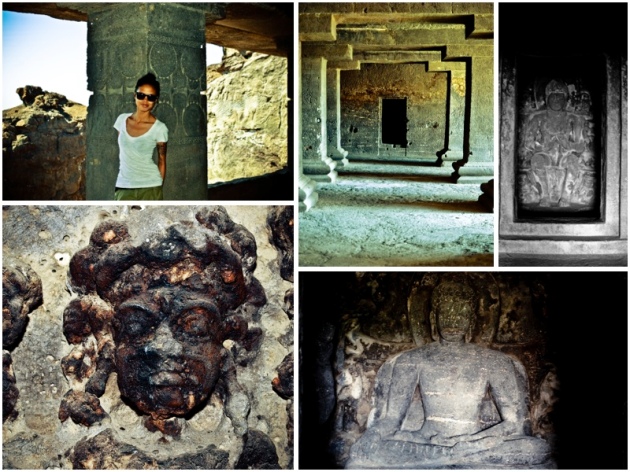 Cave 12 (Teen Tal)
As implied by the name, Teen Tal is a three storeyed complex. This is the largest monastic complex at Ellora and entered through a courtyard. It contains a very large seated Budhha on the 3rd floor 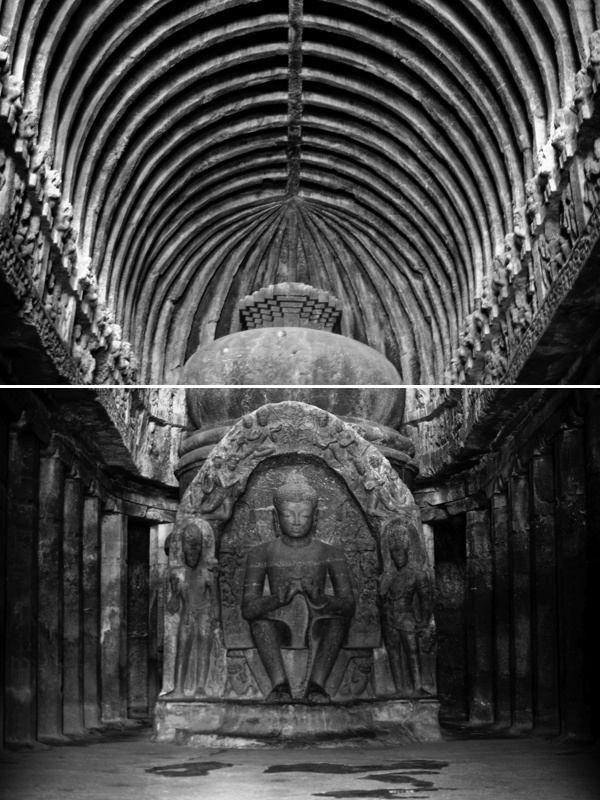 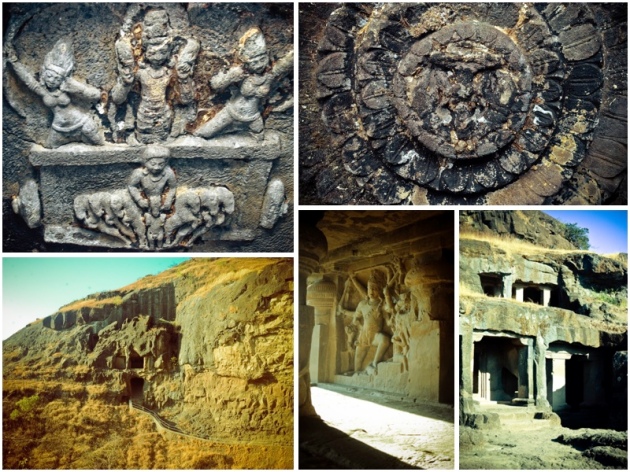 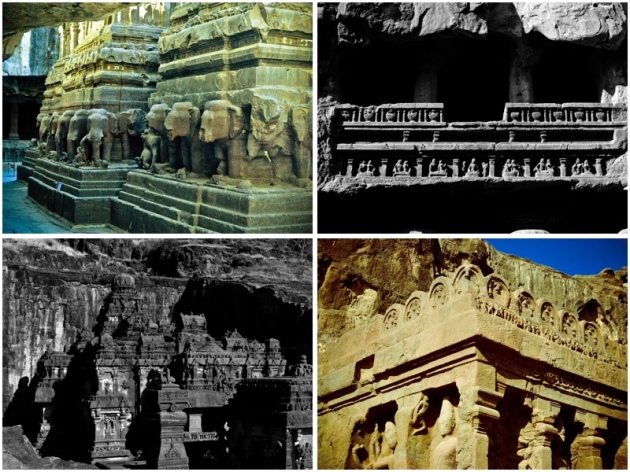 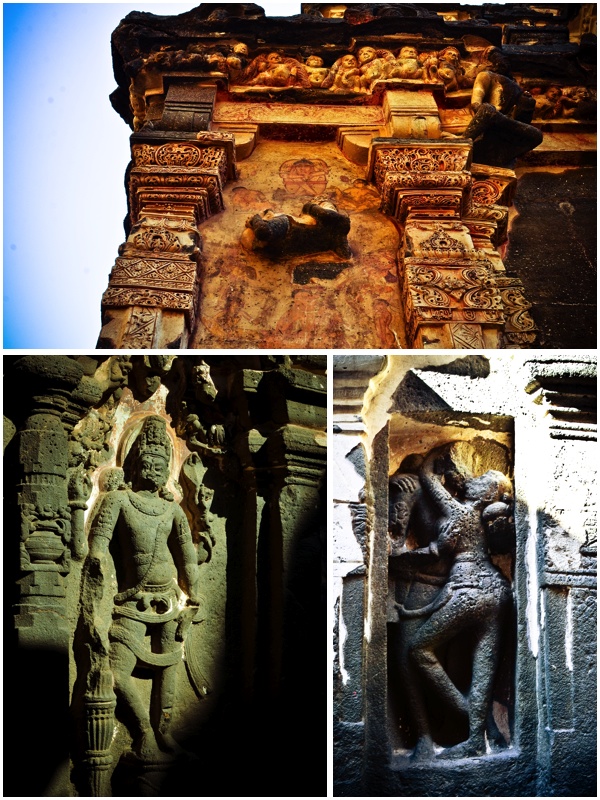 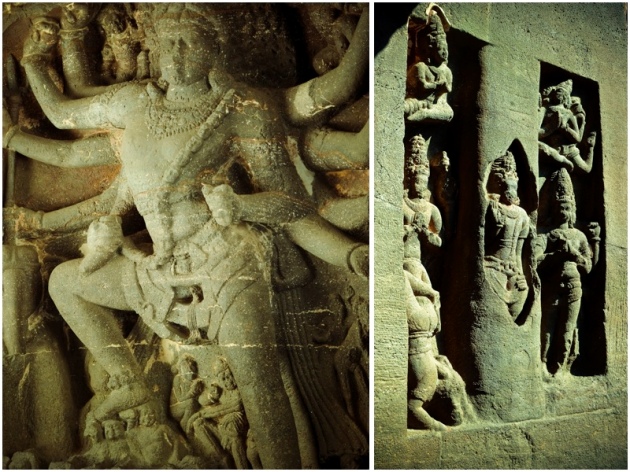 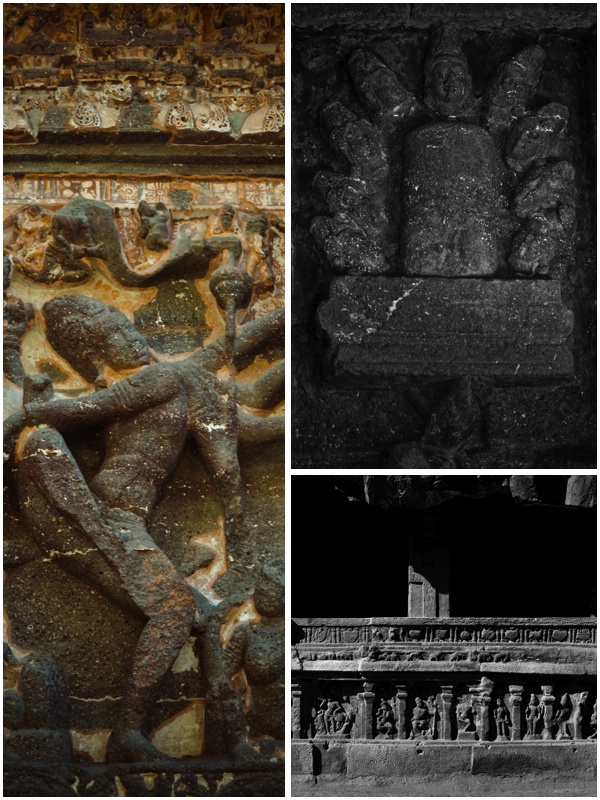 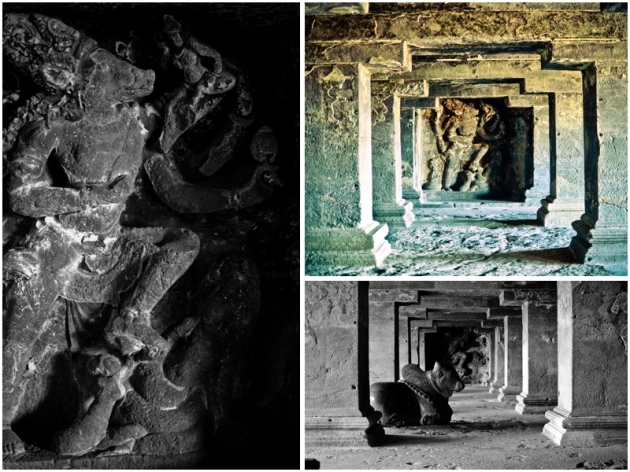 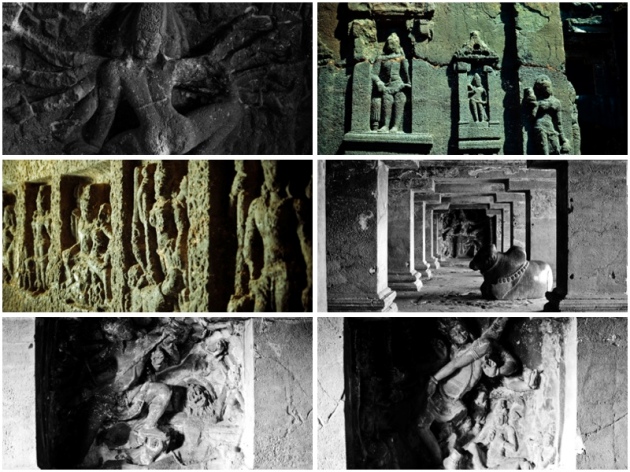 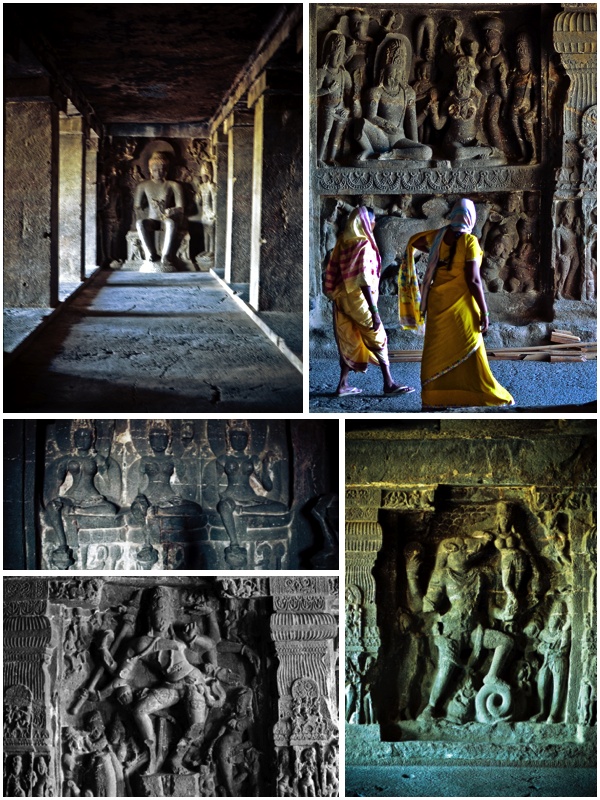 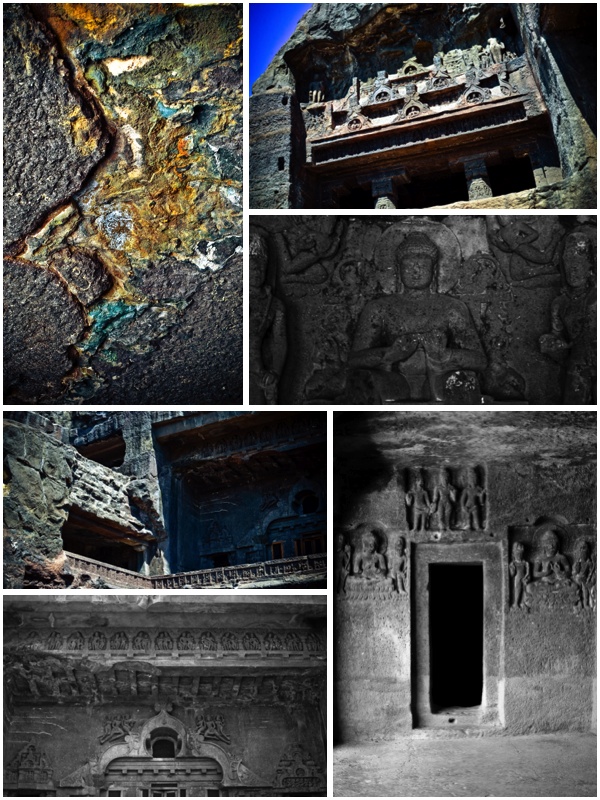 While it is possible to visit Ajanta Caves throughout the year it does become a bit challenging to walk and explore all the caves during the peak summer heat and during the monsoon rains.

One ideally should plan on 3-5 hours as the required amount of time to fully experience the Ajanta Caves – and there is a significant amount of walking required to cover the caves.

As such, the best time to visit Ajanta Caves is between October and March after the peak monsoon rains and before the onset of Summer.